Interesting piece by Madeline Bocaro on the stories behind those iconic Roxy Music album covers and the models who appeared therein. 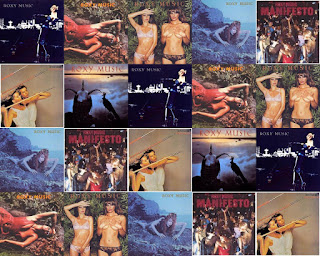 I have a bit in the Roxy chapter looking at the links between the word "model" (as in "Remake/Remodel", "Editions of You") and mannequin....  and between mannequin and sex doll. In reference to "In Every Dream A Heartache" with its blow-up bimbo, and the way that song prefigures (possibly influenced?) Ian McEwan's "Dead As They Come". The idea being that there is something fundamentally necrotic or necrophiliac about the very concept and functioning of "glamour" - freezing an image of perfection, a surface fetish in denial of messy abject interiors.

But I should really have mentioned the cover of Manifesto, the first album by the reactivated Roxy Music of the late Seventies. It's a crowd of mannequins. 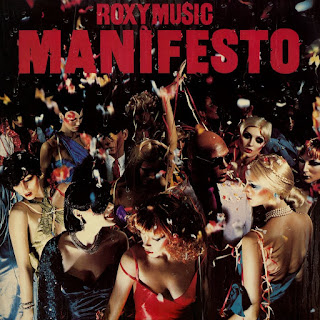 "Female models are substituted by mannequins on Manifesto. Famous shop mannequin maker Adel Rootstein was commissioned for the shoot. Kari Ann, Roxy’s first album cover girl was actually the model for some of the mannequins. You can obviously tell which ones resemble her. The twins in the background are actually real people – Roxy Music fans who traveled extensively to see the band perform. The picture disc version of the album featured naked mannequins, as did the picture sleeve singles. The typography, as well as the album’s title, were inspired by the first edition of Wyndham Lewis‘s literary magazine BLAST. Concept: Bryan Ferry. Designer: Antony Price" 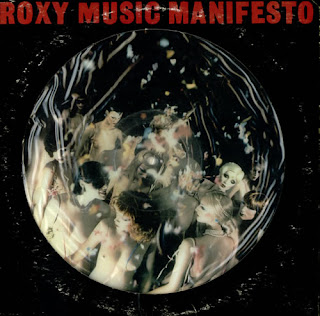 
- February 01, 2018
Email ThisBlogThis!Share to TwitterShare to FacebookShare to Pinterest