Scene: a shared and spartan apartment in Moscow circa 1939. Ninotchka, a diplomatic envoy recently returned from Paris, is catching up with her flatmate Anna, a musician who plays in a symphony orchestra. 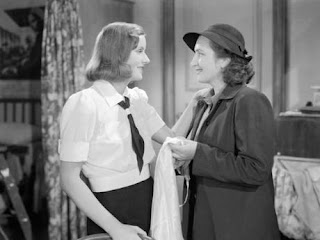 ANNA (brandishing a chic silk undergarment Ninotchka brought back from Paris): When I passed through the laundry yard today I saw all the women huddled around this, so I brought it up here. Things like this create a bad feeling - first, they didn't know whose it was, and then they saw the Paris label, and did it start a commotion! Some said it's what we all ought to wear and others said it's like hanging foreign ideas on our clothes line, it undermines our whole cause.

ANNA: You know how it is today - all you have to do is wear a pair of silk stockings and they suspect you of counter-revolution.

NINOTCHKA: Thank you, Anna - I'll dry it up here when I wash it next. I should hate to see our country endangered by my underwear. 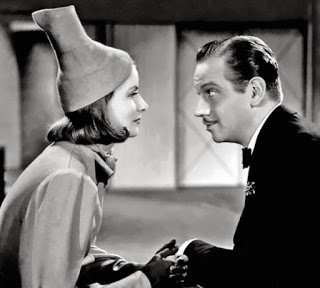 [Anna asks Ninotchka if she brought anything else  back from Paris and she explains that she left everything else she bought behind because she had to return to Moscow in a hurry; she just happened to be wearing the camisole when she left for the airport. She mentions that among all the garments  left behind, her favorite was a hat.]

NINOTCHKA: It was very silly. I would be ashamed to wear it here.

ANNA: As beautiful as that! 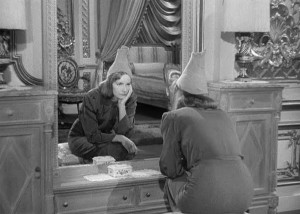 [Ninotchka mentions that she also bought an evening gown, which causes Anna to marvel at the extravagance of wearing different clothes for different times of day]

ANNA: You are exaggerating!

NINOTCHKA: No, it's true - that's how they live in the other world. Here we dress to cover up our bodies - to keep warm.

NINOTCHKA: Sometimes they're not completely covered - but they don't freeze.

[Anna strokes the exquisitely soft material the undergarment is made of, marveling that such luxuriant fabric is used for a piece of clothing that isn't even visible to other people's eyes. She asks Ninotchka if she can borrow if for her upcoming honeymoon, and Ninotchka says she can have it for keeps. An overjoyed and grateful Anna hurries off to work clutching her cello.  Ninotchka, finding herself alone, turns on the radio for solace, looking for music. But every Soviet station is broadcasting state propaganda - facts and figures about the economy, productivity soaring, etc] 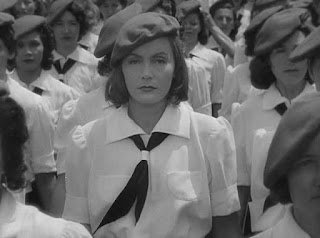