the truth of pop (unsightly return)

"Listening to the families’ stories, I noticed how as soon as they came into Michael Jackson’s orbit, everything became kind of dreamlike and unreal. It’s easy to condemn the parents who failed to protect their children from the star.... But it seems normal to me. Have you had a period when you suddenly fell in with the cool crowd, or even one person who was glamorous to you? Such magnetism can blind and derange....  These boundaries are far more unstable for children. What unsettles me in hearing Leaving Neverland’s two alleged survivors, now grown men, is that despite everything twisted about it, they’re each telling a love story....

"These families’ stories reflect the whole culture’s relationship with stars, and their relationships with us—stories of idolization and exploitation, of projection and possession, of opportunism and rationalization. And of the wreckage left behind. When you love a star, inherently you’re loving a person who doesn’t exist, a figment of image creation and your own manipulated yearnings. In Jackson’s case, that goes double. He seemed so dissociated in the ways he presented himself through the last half of his life that it’s hard to guess how much of reality he was experiencing. Was he a person who didn’t exist even for himself?

"If there’s anything Leaving Neverland makes me want to get rid of entirely, it is child stardom, which mangled this man’s psyche and went on to be a lure for the children and families who attached themselves to him. I could wish the same about stardom in general, but that would be another rhetorical flourish. Stardom, that atrocity waiting to happen, is what the machinery of this culture is geared to produce, more so than any particular artwork or entertainment. It is beyond the control of any of us..."

This post is a sequel to this earlier one entitled The Truth of Pop about pop as an industry of child-exploitation.

Which starts with a link to a story on Joe Jackson as monstrous father / father-of-monster.

(not the dude who did "Different for Girls" and "Stepping Out", silly!)

Oh and coincidentally,  a star in my own personal firmament is coming soon with a whole book on the starchild with the lost boyhood 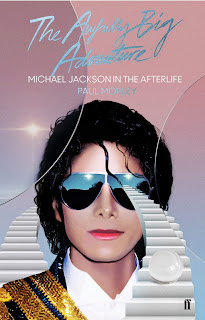 That cover is quite vaporwave

Curious to see if The Awfully Big Adventure is an expansion on the very long essay in Loops from a decade ago, or simply that piece repackaged...

... and also how Morley dances around these very issues...