the greatest English band to come out of America 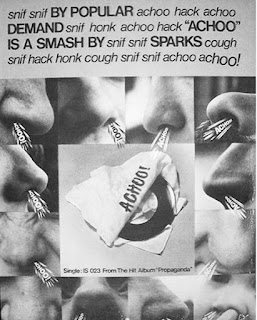 "Sparks established themselves as the greatest English band to come out of America since the Nazz" -  Ron Ross, Record World,  October 28th 1972

"You can't be indifferent to them... Both albums are as good as Sgt. Pepper's. Though they're certainly not equivalent social milestones, they resemble it in that their music is obviously and totally different from anything we've heard before" - Todd Rundgren, 1972

- May 23, 2020
Email ThisBlogThis!Share to TwitterShare to FacebookShare to Pinterest
Labels: ANGLOPHILIA, SPARKS