A pal of Mott the Hoople - she supplied some vocals to "Roll Away the Stone" and also came up with the daft name "Ariel Bender" for the band's new lead guitarist Luther Grosvenor, formerly of Spooky Tooth - so Lynsey D P is tangentially connected to the glam commotion as well as a pervasive participant in the frivolity of UK pop during the first half of the 1970s

Here, she verges into glam terrain with what seems to be her attempt at her very own "Lola" - cross(dress)ed with "Arnold Layne"  and ever so slightly anticipating the scenario of Barbara Mason's "Another Man"

The tale of a relationship that founders when she discovers that he...  likes wearing women's clothing? Or is just a chronic narcissist, who spends even more time looking in mirrors and caking on make-up than she does (which would really be saying something)

Could it be? Is it true?
Was it me? Was it you?
Because I thought you were a brother
But you turned out like my mother
And it's getting a drag

I was sure, I was wrong
But before very long
I found that I had kissed a mister
Just as pretty as a sister
And it's getting a drag

Who am I? Who are you?
What am I gonna do?
Most people make up when they break up
But we break up 'cause you make up
And it's getting a drag

Bye bye, don't cry
My, my have I been had
So sad, too bad
It's getting a drag


Jonathan King essayed a few similar moves at this time, coming at it from not so much the MOR as the bubblegum / novelty pop end of things 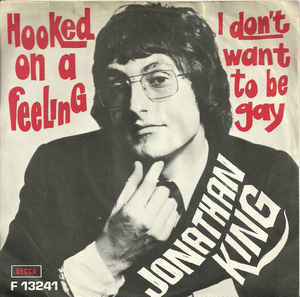 Lyrics from the object of predation's point of view (ironically)

Now, could this be the only reference to "tinea" in a song lyric?


I wouldn't want to live in his psyche ta very much

I've strayed from the lovely (if regrettably, it appears, Tory) Lynsey

Is it just me or is the drum crack in this like the snap of a whip?

She went out with one of my favorite movie stars, James Coburn, for many years

I imagining her also dating Formula One racing champions and manly types like that.

For all the ultra-femme image and cooing high-pitched voice, a driven and creatively autonomous music biz stalwart who wrote, arranged, produced, you name it.

Shame about the Tory bit though.

- May 27, 2020
Email ThisBlogThis!Share to TwitterShare to FacebookShare to Pinterest
Labels: LYNSEY DE PAUL, MOTT THE HOOPLE