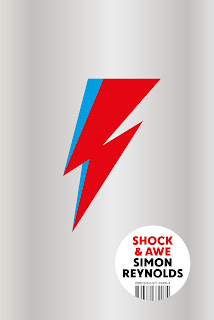 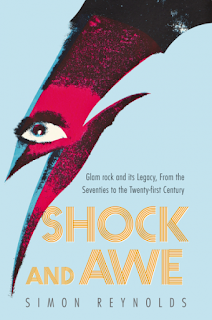 "At the dawn of the 1970s, GLAM smashed through the faded denim dream of the hippie era – an eruption of alien glamour, gender mayhem and thrilling music that changed pop forever.

SHOCK AND AWE takes the reader on a wild tour of the glam era, chronicling the exploits of its flamboyant personalities against a backdrop of social upheaval and political disillusion. Spearheaded by David Bowie, Alice Cooper, and T. Rex, the glam movement reveled in artifice and spectacle. Simon Reynolds explores how artists like Roxy Music, New York Dolls and Lou Reed celebrated illusion over truth and self-invention over authenticity. SHOCK AND AWE tracks the reverberations of glam themes – fame, decadence, extreme fashion, theatrical excess – as they continue to influence contemporary pop.

SHOCK AND AWE is a defining work that stands alongside Reynolds's classic Rip It Up and Start Again and Retromania as a milestone in cultural criticism. 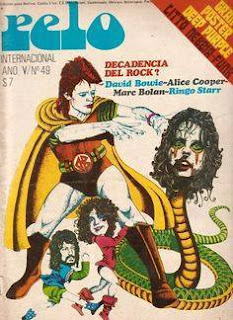 "From the acclaimed author of Rip It Up and Start Again and Retromania—“the foremost popular music critic of this era (Times Literary Supplement)—comes the definitive cultural history of glam and glitter rock, celebrating its outlandish fashion and outrageous stars, including David Bowie and Alice Cooper, and tracking its vibrant legacy in contemporary pop.

"Spearheaded by David Bowie, Alice Cooper, T. Rex, and Roxy Music, glam rock reveled in artifice and spectacle. Reacting against the hairy, denim-clad rock bands of the late Sixties, glam was the first true teenage rampage of the new decade. In Shock and Awe, Simon Reynolds takes you on a wild cultural tour through the early Seventies, a period packed with glitzy costumes and alien make-up, thrilling music and larger-than-life personas.

"Shock and Awe offers a fresh, in-depth look at the glam and glitter phenomenon, placing it the wider Seventies context of social upheaval and political disillusion. It explores how artists like Lou Reed, New York Dolls, and Queen broke with the hippie generation, celebrating illusion and artifice over truth and authenticity. Probing the genre’s major themes—stardom, androgyny, image, decadence, fandom, apocalypse—Reynolds tracks glam’s legacy as it unfolded in subsequent decades, from Eighties art-pop icons like Kate Bush through to twenty-first century idols of outrage such as Lady Gaga. Shock and Awe shows how the original glam artists’ obsessions with fame, extreme fashion, and theatrical excess continue to reverberate through contemporary pop culture."