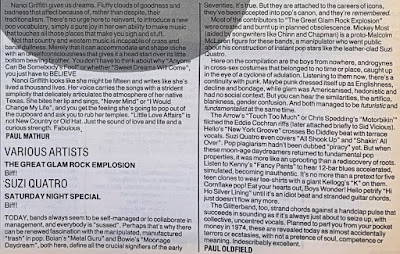 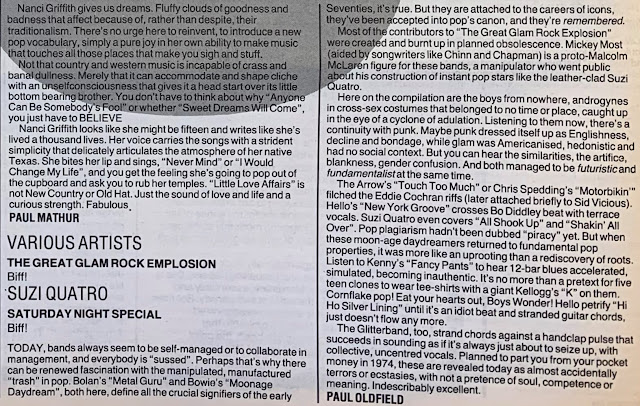 Originally so enthused were we by the early 70s 7 inch singles we'd exhumed from jumble sales and junk shops that we planned to devote a whole issue to glam and glitter....  I believe David Stubbs was going to write about the Year 1975 as the nadir of pop history that 1985 mirrored and that he envisioned extending itself perpetually...  I certainly had some notes on the Sweet, Gary Glitter, Alice Cooper that I stumbled on only a few years ago for the first time since they'd been written in '85 and discovered to my surprise that many of the same phrases and thoughts occurred to me again when working on Shock + Awe

Some of those thoughts and sensations did get aired in this 89? 90? piece for Melody Maker on Last Few Days!, one of those phantom groups that sauntered through the pages of the music press leaving nary a trace on official poprock history 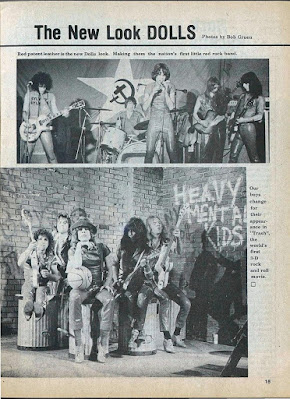 This is 1975 - I wonder if they got "Heavy Mental Kids" from the band Heavy Metal Kids, or direct from Burroughs.

Burroughs, a writer I'm glad existed but who I never have any desire to read.

New York Dolls, a band I'm glad existed but I never have any desire to hear.

Except, except, for this

Heavy Metal Kids, a band where the name is much better than the sonic actuality

strange / estranged (but not really) children of glam

"Every New Romantic was an idol-wannabe looking to cross over and make it big. While the likes of Boy George became  stars, a new scene was fermenting in during 1982: Goth. Its epicenter was the Batcave, a nightclub packed with fans of the Banshees and the early culty-and-kinky Adam & the Antz. “It was a light bulb for all the freaks and people like myself who were from the sticks and wanted a bit more from life,” Johnny Melton from the band Specimen has said of the Batcave. “Freaks, weirdos, sexual deviants…“ The club’s vibe was all leather-and-lace and B-movie ghoulishness, while the soundtrack consisted of old glam, the Cramps, and early efforts by Goth bands like Alien Sex Fiend.

"But while Goth rejected synths and discofunk, the scene was really not that different from New Romanticism, sharing common ancestry in Bowie/Roxy and a passion for posing. There was even some cross-over between the scenes: Goth face Andi Sex Gang shared a squat with Boy George at one point, while Theatre of Hate frontman Kirk Brandon is reputed to have been on even more intimate terms. Specimen’s anthem “Stand Up, Stand Out” could have been a manifesto for New Romanticism as much as for Goth, as could Banshees songs like “Painted Bird”, which paid tribute to their audience with the lines: “confound that dowdy flock with a sharp honed nerve/because we’re painted birds, by our own design”.

"Like the Blitz before it, the Batcave metastatised across pop culture, spawning similar scenes across the and the world, while its bigger talents became successful--and increasingly conventional-sounding--rock bands. Meanwhile, the spirit of “don’t dream it, be it” rematerialized in a new club, Taboo...."