True, and yet I am always surprised by how much punk is already contained within and preempted by certain glam and glitter tunes - sonically (glam's rarely ornate, musically - quite the opposite), attitudinally, philosophically

like, why was pub rock even necessary? this is Watneys Red Barrel converted into sound (I might be channeling Bob Stanley here)

Not even mentioning all the direct transitions -  County, Dolls / Heartbreakers, Slaughter and the Dogs...  TV Smith had a glam band before the Adverts

continuity versus rupture = a big dilemma for historians - which one to emphasize?

i generally opt to honor how it felt at the time, to the agents of history and the onlookers

Digi-glam’s final frontier is pure fiction. Step in much-discussed and highly polarizing label PC Music and its roster of semi-imaginary pop stars like Lipgloss Twins, Princess Bambi, and Hannah Diamond.  Released in August via XL Records, but co-produced by PC mastermind A.G. Cook, QT’s “Hey QT” sounds like 4-year-old Lola from the British animated TV series Charlie and Lola, now grown up enough for first crushes and texting. In a nice joke, QT (in real life, the performance artist Hayden Dunham) is linked to the fictitious product DrinkQT, an energy drink.  But in a world where K-pop and J-pop already approach the state of animation, what is the point of PC, exactly? Not satire or parody, says Cook. Others identify the aesthetic as “post-irony”: a simulation of the mainstream that is very slightly askew, replacing critique and commentary “with ambiguity and uncanniness.”

Peel anticipates junkshop glam - at the time - in this survey of 1974 written for Sounds.

..."top teen bands such as Slade and Sweet and Mud have made records which collectors will be collecting avidly, as collectors always do, in a few years time" 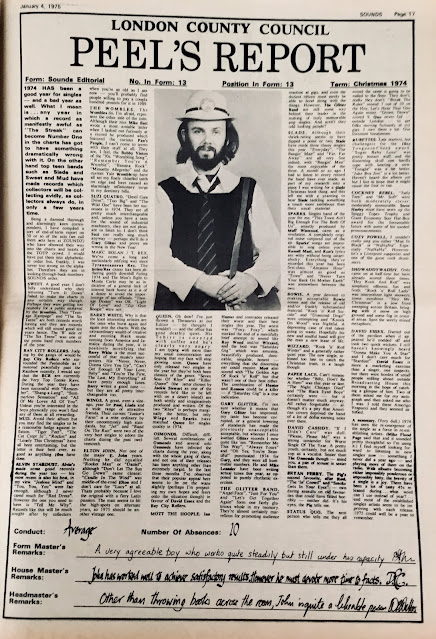 As for the schoolgirl uniform -  tempting as it is to see it as a glam cross-dressing move, the fear is that it points to more dubious tastes  - the parallel would be less with simpering Steve Priest of The Sweet, (who said of his glam-era image "I looked like a 9 year old girl") than with sweaty-palmed Gazzer  Glitter.... 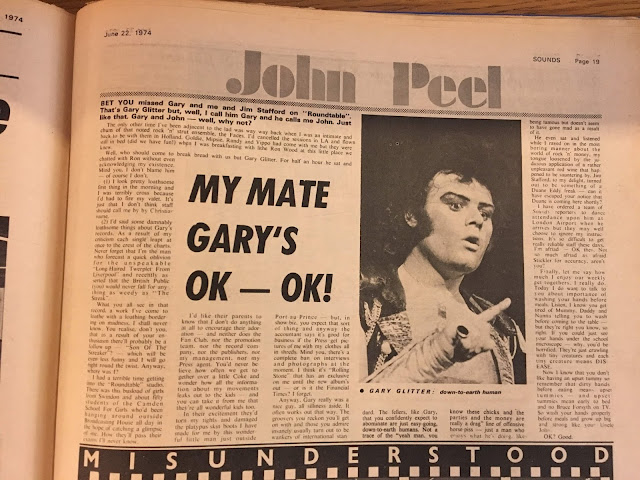 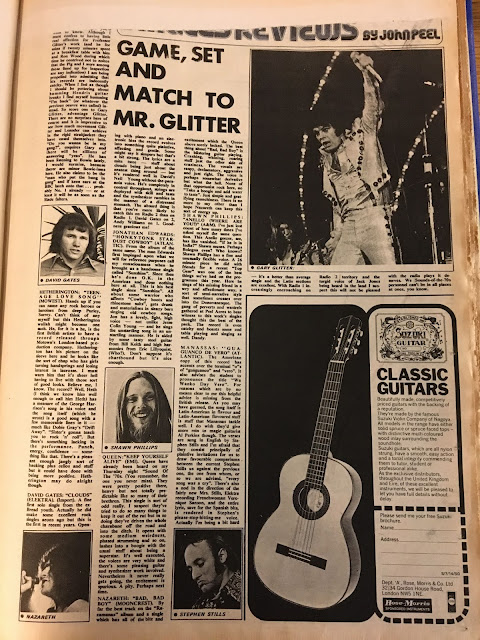 “I would rather have been raining kisses on her eager, upturned face” – not even hiding in plain sight is  it? 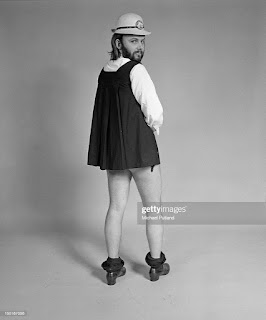 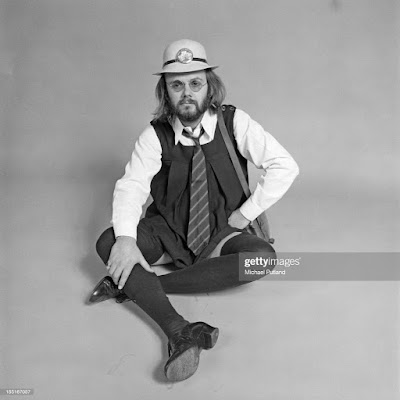 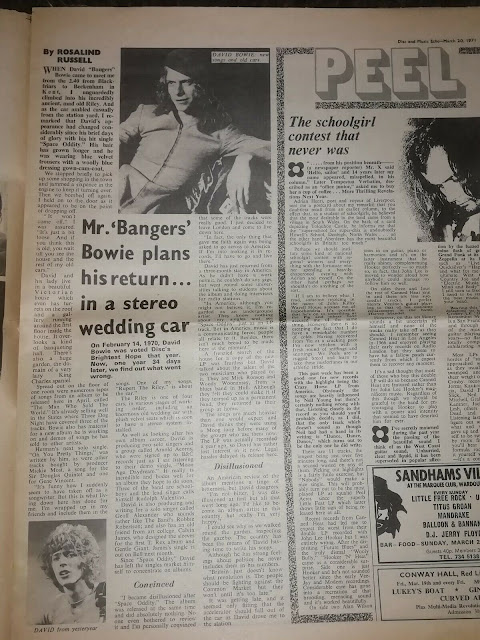 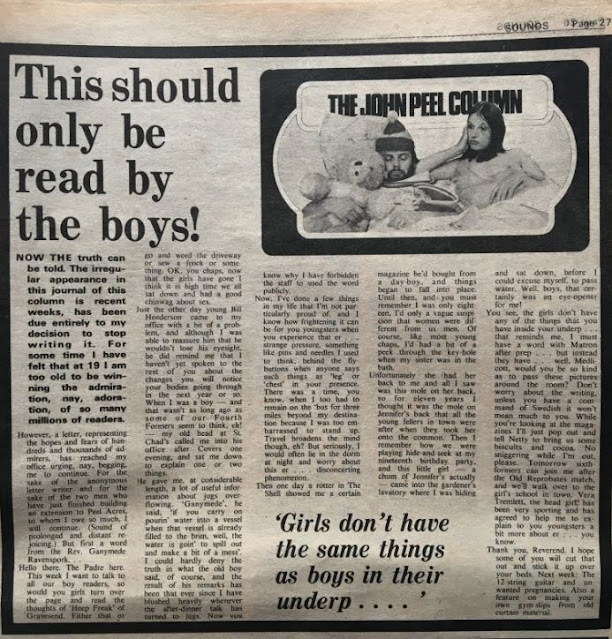 Glam metal  (or even Glam, according to the Chuck Klosterman book) - better known as Hair Metal , or even Sunset Stripmetal, makes an appearance in the 'aftershocks' section of S+A,...

But here is some real-time writing from me about glam metal, when I went to August 1987 Castle Donington Monsters of Rock festival and wrote it up for Melody Maker:

'"BON JOVI cocktease the audience. After a very long delay, giant vidscreens cut to… Bon Jovi's dressing room! Bon Jovi making their way through the backstage maze! A superb baiting of the breath. And then amid a fanfare of fireworks and dry ice… Bon Jovi descend a Ginger Rogers' staircase…

"I enjoy everything about Bon Jovi tonight except their music. In this sodden, beleaguered context, the lasers, the slick bombast, the no-expense-spared showmanship were as welcome as Hollywood razzamatazz in the Depression. Everything must have been rehearsed with military precision, every pout, preen and strut, because it was video-taped, quick-cut and blown-up on the vidscreens as it happened. MTV was inflated to the dimensions of a circus. I enjoyed, so help me, Jon Bon Jovi prancing about on the top of the lighting gantry, enjoyed their guitarist's solo (it blended most pleasingly into the giant, ziggurat riffs of Zep's "Dazed and Confused"). But the music isn't heavy metal, it's harmony rock, all rococo synth and soul-rich singing (euucch!). The tunes are trite, as trite and appallingly sentimental as the philosophical and emotional repertoire of the band. The titles tell the whole, stunted story: "You Give Love a Bad Name" (the Bitch who "promised me heaven/gave me hell"), "Wild In the Street", "Tokyo Rose", "Together Forever" (a ballad about friendship as syrupy as anything by Lionel Richie).

"Bon Jovi constantly refer to "rock'n'roll" but there's nothing here that fits my definition of rock - no sense of provocation, no idea of change or movement, no impossibilist reproach to the world and its limits. The fantasies here are perfectly feasible -- it's possible to live a monied playboy life of rocking out and screwing foxy chicks, it's just very very unlikely that any of their fans ever will*. Bon Jovi aren't rock'n'roll, they are showbiz, and showbiz is all about the idea that the world is as it can only be. Metal bands may call their music "heavy metal" but really they deal in light entertainment: their job is take people's minds off things. Tonight, Bon Jovi did a damn good job of taking my mind off my wet feet and incipient hypothermia."

* Which is why bling rap / trap = the hair metal stage of hip hop.

you got du look

"Cinéma du look was a French film movement of the 1980s and 1990s, analysed, for the first time, by French critic Raphaël Bassan in La Revue du Cinéma issue n° 448, May 1989, in which he classified Luc Besson, Jean-Jacques Beineix and Leos Carax as directors of the "look".

"These directors were said to favor style over substance, spectacle over narrative.It referred to films that had a slick, gorgeous visual style and a focus on young, alienated characters who were said to represent the marginalized youth of François Mitterrand's France. Themes that run through many of their films include doomed love affairs, young people more affiliated to peer groups than families, a cynical view of the police, and the use of scenes in the Paris Métro to symbolise an alternative, underground society. The mixture of 'high' culture, such as the opera music of Diva and Les Amants du Pont-Neuf, and pop culture, for example the references to Batman in Subway, was another key feature.

Never heard of this until, well, now.

It overlaps with, or is a subset, of what I call "Time Out films" - films that Time Out would give rave reviews, often there'd be a big feature or a cover story. So you would go and see the latest rave, "must see" film -  and be entertained - they had certainly had style and flash - but, a curious thing - they would leave no after trace - certainly nothing that would haunt and linger in the way an earlier era of arty European film (or a darker Hollywood film)  that you'd caught on BBC2 as a teenager (in the hope most of the time that there'd be a bit of nudity) might stick with you for years and years after...  a troubling scene or an unhappy ending or a disquieted mood...   The Time Out film would just pass straight through the system - glossy entertainment with a tinge of art.

Examples of Time Out films = Betty Blue, Jesus of Montreal, many many others whose names I've forgotten (which is memory doing its job, eliminating the non-nutritive)

"Time Out films" = a period-bound genre to me only because of a relatively defined era in which I lived in London and therefore read Time Out fairly regularly (the dowdier, less yuppie oriented City Limits was preferred and usually bought, until it became too dowdy and thin)  i.e. end of '85 to 'end of '94).