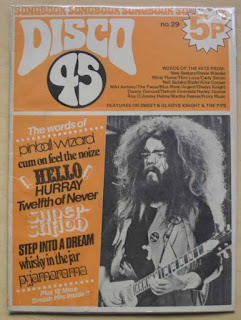 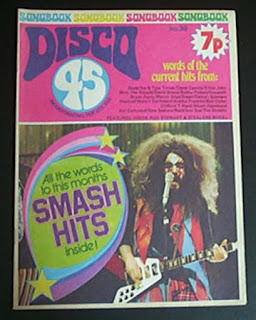 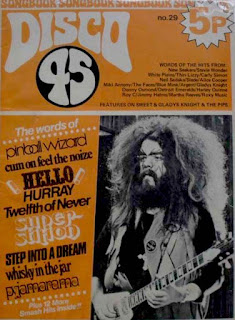 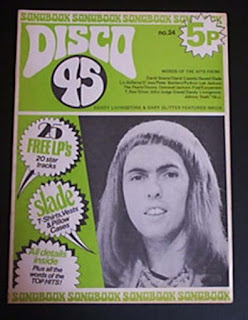 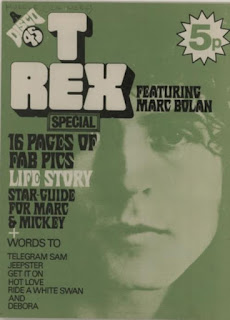 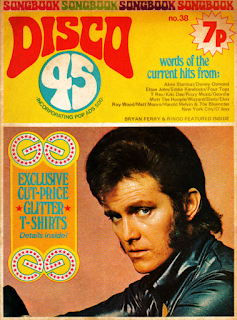 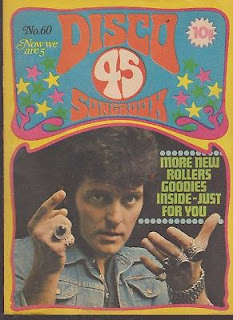 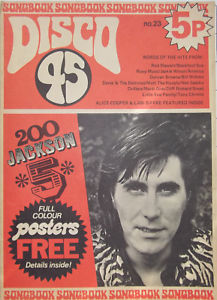 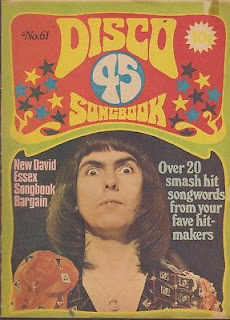 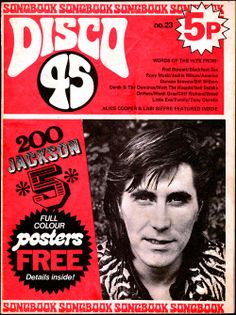 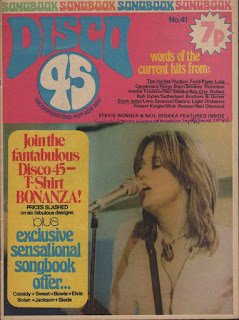 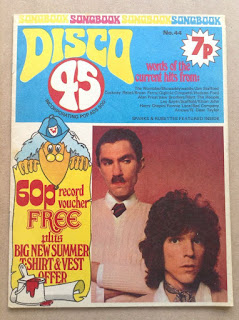 Disco 45 was a music magazine published monthly in the United Kingdom between 1970 and 1983. It was best known for printing the lyrics of pop songs of the time. It was published by the Trevor Bolton Partnership of Rye, Sussex (UK).established in 1970.[1] Issue 1 was published in November 1970[2] and featured a photo of Mick Jagger on the front cover and the lyrics from songs by Jimmy Ruffin, Cat Stevens, Don Partridge, Roger Whittaker, Pickettywitch, Stevie Wonder, Creedence Clearwater Revival and others. Each issue published the lyrics of the popular songs.[3] Later its name was changed to Disco 45 Songbook.[2]
It was originally priced at 1 shilling, changing to 5p post-decimalisation. Disco 45 folded in July 1983 after publishing a total of 153 issues.[2]
Disco 45 paid for small ads inserted from readers (usually for selling 45's). At first, the small ads were few but as the idea caught on, there were too many to incorporate within the pages and so a sister magazine titled "Pop Ads 500" was introduced in 1972 which also sold for 5p. This idea was short lived and was incorporated into issue 34 of Disco 45, the main magazine rising to 7p with the merger issue which also became colour for the first time (previously mono-colour) and with extra pages. 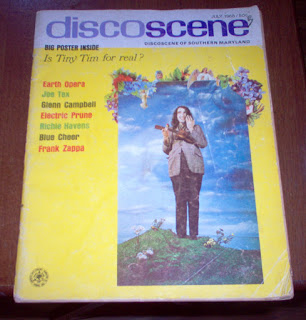 - December 20, 2018 No comments:
Email ThisBlogThis!Share to TwitterShare to FacebookShare to Pinterest

Always a little amazed when people seem to suggest that Jim Morrison was unaware of his own ridiculousness. i think he reveled in it, plunged into it - pushed right through it.
All performance is an absurd exhibition.
What a grotesque, unseemly thing to do - go onstage and mime out emotions, desire, sexuality, for strangers's eyes. (It's why historically actors and all performers have been linked in the puritan imagination with prostitutes).
Nick Cave (early on very Jim-indebted) wrote a great song about this in the Birthday Party - "Nick the Stripper"
There's a cool Iggy Pop quote about the stage that I've never been able to source - "who can account for facial expressions made in a mirror of people?"
- December 20, 2018 No comments:
Email ThisBlogThis!Share to TwitterShare to FacebookShare to Pinterest
Newer Posts Older Posts Home
Subscribe to: Posts (Atom)