"Trump claims the powers of a tyrant, behaves like one, talks like one, struts like one, has broken every norm a liberal democracy requires, and set dangerous precedents that could enable a serious collapse in constitutional norms in the future.

"But he doesn’t actually want to be a tyrant. It’s way too much work. It requires real management skills — and Trump has none. He wants to be treated like a king, regarded as a king, and fawned on like a king, but that’s about it. He seems only attached to power insofar as power is attached to fame, and fame without criticism helps assuage his acute and disordered psychic needs.

"This, in Bill Kristol’s rather brilliant phrase, is “performative authoritarianism.” ... Trump saw [the coronavirus emergency]  purely as an obstacle to his reelection message about a booming economy, a blot on his self-image, an unfair spoiling of his term. Instead of exploiting it, he whined about it. He is incapable of empathy and so simply cannot channel the nation’s grief into a plan of action. So he rambles and digresses and divides and inflames. He has managed in this crisis to tell us both that he is all-powerful and that he takes no responsibility for anything.

And I suspect that this creepy vaudeville act, in a worried and tense country, is beginning to wear real thin....  While governors are acting, Trump is chattering. While people are dying, Trump is bragging about his own ratings, signing his name on stimulus checks, pushing quack remedies, and abetting conspiracy theories about Chinese laboratories. And although there is a rump group of supporters who will follow Trump anywhere and may launch tea party–style protests against social distancing on his behalf, I suspect this fundamental unseriousness after responding to the virus so late is finally taking its toll." - Andrew Sullivan

a piece by Rebekah Gonzalez for I Heart 80s Radio on Alice Cooper's other "run for office" - except this time not just performative as with "Elected" in '72, but as a write-in candidate for governor of Arizona in 1988, under the slogan: "I represent the Wild Party and I even have a campaign slogan: Alice Cooper - A troubled man for troubled times."


- April 24, 2020 No comments:
Email ThisBlogThis!Share to TwitterShare to FacebookShare to Pinterest


'"Earache My Eye" is a comedy routine and song by Cheech and Chong from their 1974 album Cheech & Chong's Wedding Album. The routine is about a teenager (played by Tommy Chong) who wakes up and listens to a song by "Alice Bowie" (Cheech Marin), while his father (Marin again) yells at him to get ready for school. The song, unnamed in the routine, was released as a single under the name "Earache My Eye" ... The song was released as a single in 1974 and reached #9 on the Billboard charts and #4 in Canada....' - - Wiki 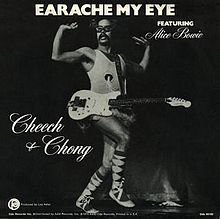 '"Earache My Eye" consists of a song followed by a comedy skit. In the skit, Chong plays a rebellious teen. At the beginning of the piece we hear snoring, followed by an alarm clock, and then the boy wakes up noisily. He starts up a glam rock record, with Cheech Marin singing the lyrics as glam rock star character Alice Bowie who, as the name implies, is supposed to be a combination of Alice Cooper and Ziggy Stardust-era David Bowie (at one point in his tune, "Alice Bowie" even mentions having orange hair, which the real David Bowie had sported at that time). The song itself is about a teenager fantasizing about becoming a world-famous rock star, becoming very wealthy and not having to listen to authority as a result, including being disowned for wearing his sister's pantyhose. The teenager states that he did not care if the world came to an end and that he was kicked off the basketball team by the coach for acting like a "queen".

'As the song continues into an electric guitar-heavy bridge, the teen's dad (Marin) barges into the room and yells, "I said turn that thing down and get ready for school!", and scratches the record, which annoys his son. The dad then tells his son to get his "fanny perpendicular" and get ready for school. The son then complains about an earache, prompting the dad to exclaim, "Earache my eye, how would you like a butt-ache?" The boy then gets even snottier, provoking his father to swat him with a belt. When he ridicules the spanking as painless, the father then whips him into sniveling, outward compliance, which lasts until his father leaves the room, after which the teen puts the record back on.

'During the latter part of the record ("Turn That Thing Down") – essentially, an extended, electric rock guitar-driven coda – the father can be heard knocking on the door several times demanding that his son "turn that thing down and get ready for school"' - - Wiki.

Here's the whole sketch + song from the Wedding Album


"... The song had its music written by Gaye Delorme and was performed by session musicians including Delorme on guitar and Airto Moreira on drums. It is best known for its guitar riff.'
- Wiki

It's a good riff.

My daddy, he disowned me 'cause I wear my sister's clothes
He caught me in the bathroom with a pair of pantyhose

My basketball coach, he done kicked me off the team
For wearin' high heel sneakers and actin' like a queen

The world's comin' to an end, I don't even care
As long as I can have a limo and my orange hair