context: Andy Biggs is circulating a letter calling for hearings into debunked election fraud allegations featured in “2000 Mules” — the same day that 1/6 committee revealed how Trump’s election lies incited a mob to attack the Capitol. Also previews probes to come in a GOP House.

Comments  Teri Kanefield:
"People like Andy Biggs look at today's hearing and think, "That was a good show. We need to put on a better show.
"For people unhinged from the truth, it's all a show. And the person who puts on the best show wins."
David Frum at the Atlantic
"Trump specializes in creating dominance-and-submission rituals. His Republican base is both the audience for them and the instrument of them. But to those outside the subculture excited by these rituals, they look demeaning and ridiculous. Everybody else wants jobs, homes, cheaper prescription drugs, and bridges that do not collapse—not public performances in Trump’s theater of humiliation"
Tom Nichols at the Atlantic
"The United States now faces a different kind of violence, from people who believe in nothing—or at least, in nothing real. We do not risk the creation of organized armies and militias in Virginia or Louisiana or Alabama marching on federal institutions. Instead, all of us face random threats and unpredictable dangers from people among us who spend too much time watching television and plunging down internet rabbit holes. These people, acting individually or in small groups, will be led not by rebel generals but by narcissistic wannabe heroes, and they will be egged on by cowards and instigators who will inflame them from the safety of a television or radio studio—or from behind the shield of elected office....
"There is no single principle that unites these Americans in their violence against their fellow citizens. They will tell you that they are for “liberty” and “freedom,” but these are merely code words for personal grudges, racial and class resentments, and a generalized paranoia that dark forces are manipulating their lives. These are not people who are going to take up the flag of a state or of a deeper cause; they have already taken up the flag of a failed president, and their causes are a farrago of conspiracy theories and pulpy science-fiction plots.
"What makes this situation worse is that there is no remedy for it. When people are driven by fantasies, by resentment, by an internalized sense of inferiority, there is no redemption in anything. Winning elections, burning effigies, even shooting at other citizens does not soothe their anger but instead deepens the spiritual and moral void that haunts them.
"Donald Trump is central to this fraying of public sanity, because he has done one thing for such people that no one else could do: He has made their lives interesting. He has made them feel important. He has taken their itching frustrations about the unfairness of life and created a morality play around them, and cast himself as the central character....
"I spoke with one of the original Never Trumpers over the weekend, a man who has lost friends and family because of his opposition to Trump, and he told me that one of the most unsettling things to him is that these same pro-Trump family and friends now say that they believe that Trump broke the law—but that they don’t care. They see Trump and his crusade—their crusade against evil, the drama that gives their lives meaning—as more important than the law....
"When enough Americans decide that a cult of personality matters more than a commitment to democracy, we risk becoming a lawless autocracy. This is why we must continue to demand that Trump and his enablers face the consequences of their actions: To cave in the face of threats means the end of democracy. And it would not, in any event, mollify those among our fellow citizens who have chosen to discard the Constitution so that they can keep mainlining jolts of drama from morning until night."

"Returning to Washington, D.C., for the first time since he left the White House in the aftermath of the violent assault on the Capitol, Trump gave a speech last Tuesday to the America First Policy Institute (AFPI). It was billed as a policy address on public safety. But everyone knows that policy doesn’t interest Trump in the least. What he cares about is the performative part of politics, inflaming people’s passions, creating chaos and conflict. Politics is a stage on which his disordered personality plays itself out.

"Like every Trump speech, it was undisciplined. The former president stayed on script and went off script, sometimes reading from his prepared text and other times riffing on topics including tent cities for homeless people, transgender athletes, and election lies. (The riffs are what most charged up the crowd.)"

"As it stands, the FBI action has confirmed public impressions, not transformed them. Remember that Trump secured the GOP presidential nomination in 2016 by dominating the news cycle. It barely mattered if it was good news about him or bad. He had a remarkable ability to shove everyone else off center stage while crooning “My Way.”"

Rosie O'Donnell  talks about  her pal David Bowie...  For sure I can totally see someone absolutely seething about having been tricked... 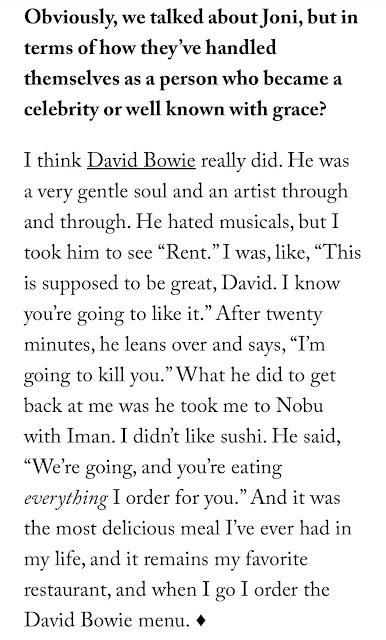